Closing Arguments In The 2022 Elections 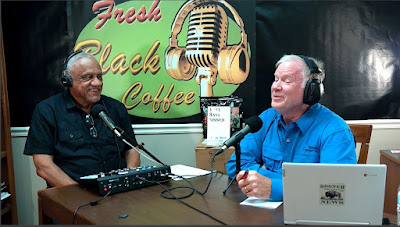 With Media Polls now covering up their psy-ops early polls, we're finally getting a better idea what the nation's voters are likely to decide in just 10 days.
Leftists Racism is rampant, and ethnic minority conservatives are the targets, because the Left is terrified that minorities might expose the lie about liberalism claiming to have minorities' best interests at heart.
Gov. Stitt is planning a big push with several national figures coming to the state in the next few days.
Mullin has big names from the Democrat Part telling Oklahomans not to vote Democrat.
Gloria Allred has come out of hiding to accuse Hershel Walker of paying a woman's medical bills.
And Markwayne Mullin reveals more about January 6th, from his view of the riots, then tells us more about his covert contracting operations.
AUDIO
VIDEO
Catch all our shows at www.FreshBlack.Coffee
Connect with us at www.facebook.com/freshblackcoffee
Our audio podcast is at feeds.feedburner.com/thefreshblackcoffeepodcast
Our video podcast is at feeds.feedburner.com/freshblackcoffeevideo
Watch the video on our YouTube channel, Facebook, website, or with your podcasting app.
We record the show every Saturday and release it later the same day.
Jeff Davis commentary appears courtesy of www.theThoughtZone.com
at October 28, 2022
Email ThisBlogThis!Share to TwitterShare to FacebookShare to Pinterest
Newer Post Older Post Home