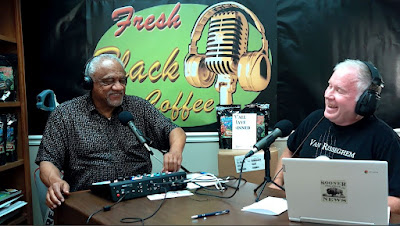 The fate of the US is hanging in the balance and complacency could spell the doom of liberty in the next 10 weeks.
Eddie & Dave take stock of the 2022 elections November teams will look like.
Dave reports on the travesty of injustice done to Paul Tay by a false claim, coupled with a zealous prosecution team who persisted in locking up an innocent man for months after it became clear that he was framed.
Eddie gives a stern warning to conservatives about the urgency of the political condition.
We discuss the current folly of an 'article 5' Convention of States, and reveal the obvious scam of National Popular Vote.
AUDIO
VIDEO
Catch all our shows at www.FreshBlack.Coffee
Connect with us at www.facebook.com/freshblackcoffee
Our audio podcast is at feeds.feedburner.com/thefreshblackcoffeepodcast
Our video podcast is at feeds.feedburner.com/freshblackcoffeevideo
Watch the video on our YouTube channel, Facebook, website, or with your podcasting app.
We record the show every Saturday and release it later the same day.
Jeff Davis commentary appears courtesy of www.theThoughtZone.com
at August 25, 2022
Email ThisBlogThis!Share to TwitterShare to FacebookShare to Pinterest
Newer Post Older Post Home