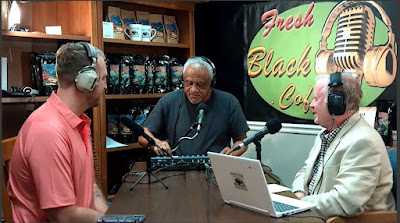 Wes Nofire may be the best hope for bringing the Eastern Oklahoma Tribes and the state political leaders to a constructive dialogue and solution to the current standoffs over crime & casino policies.
Wes is a Cherokee Tribal Council member and a conservative Republican running for the US congressional district for Eastern Oklahoma. His campaign manager is a former Mullin congressional staffer and political organizer; as well as a West Point Military Graduate.  The Nofire campaign announced that they have the support of both Gov. Kevin Stitt & AG John O'Conner.  Having the trust of tribal members and their adversary (Gov. Stitt) is a rare reality.
So we sat down for an in-depth interview about the issues impacting Eastern Oklahoma and our state's business environment.
Audio
Video
Catch all our shows at www.FreshBlack.Coffee
Connect with us at www.facebook.com/freshblackcoffee
Our audio podcast is at feeds.feedburner.com/thefreshblackcoffeepodcast
Our video podcast is at feeds.feedburner.com/freshblackcoffeevideo
Watch the video on our YouTube channel, Facebook, website, or with your podcasting app.
We record the show every Saturday and release it later the same day.
Jeff Davis commentary appears courtesy of www.theThoughtZone.com
at June 11, 2022
Email ThisBlogThis!Share to TwitterShare to FacebookShare to Pinterest
Newer Post Older Post Home