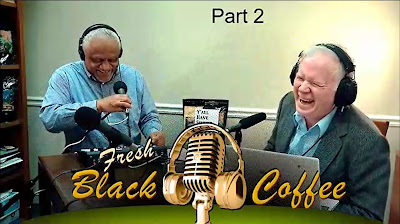 Eddie & Dave review the Walters campaign platform and the choices in the race.
Eddie exposes Trump's Republican detractors in congress, and the candidates Trump is endorsing in upcoming races.
Then we discuss efforts in the GOP 'smoke-filled-rooms' to take some GOP candidates off the ballot, rather than trusting their own primary voters.
And Margorie Taylor Green is facing a legal fight from folks who want her branded for life as an 'insurrectionist.
We discuss the David Ware Trial and the guilty verdict.
Then things really heat up when Dave defends George Zimmerman in the death of Treyvon Martin.
Audio
Video
Catch all our shows at www.FreshBlack.Coffee
Connect with us at www.facebook.com/freshblackcoffee
Our audio podcast is at feeds.feedburner.com/thefreshblackcoffeepodcast
Our video podcast is at feeds.feedburner.com/freshblackcoffeevideo
Watch the video on our YouTube channel, Facebook, website, or with your podcasting app.
We record the show every Saturday and release it later the same day.
Jeff Davis commentary appears courtesy of www.theThoughtZone.com
at April 25, 2022
Email ThisBlogThis!Share to TwitterShare to FacebookShare to Pinterest
Newer Post Older Post Home