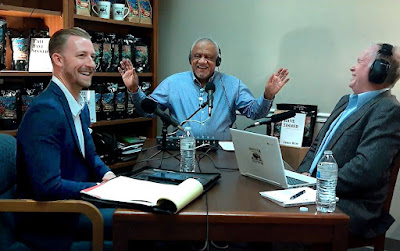 Candidate for Oklahoma Superintendent of Public Instruction, Ryan Walters; stops by on a campaign swing thru Tulsa. He's Gov. Kevin Stitt's Secretary of Education and an advisor to the Stitt Cabinet.
Ryan talks education reform and better ways to prepare Oklahoma's youth for life.
Ryan faces a primary election in late June.
We learn some new details about how Walters wants to put families more in control and give schools a better way to accomplish that.
In part two if our weekly podcast, we'll review Walters' message, and talk about other cultural & public policy issues (to be released on Monday).
Audio
Video
Catch all our shows at www.FreshBlack.Coffee
Connect with us at www.facebook.com/freshblackcoffee
Our audio podcast is at feeds.feedburner.com/thefreshblackcoffeepodcast
Our video podcast is at feeds.feedburner.com/freshblackcoffeevideo
Watch the video on our YouTube channel, Facebook, website, or with your podcasting app.
We record the show every Saturday and release it later the same day.
Jeff Davis commentary appears courtesy of www.theThoughtZone.com
at April 23, 2022
Email ThisBlogThis!Share to TwitterShare to FacebookShare to Pinterest
Newer Post Older Post Home