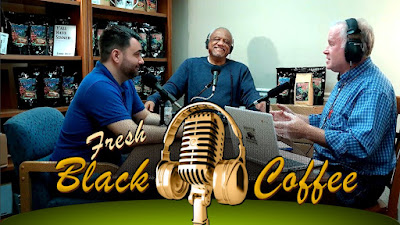 Oklahoma Senator, Nathan Dahm, joins the FreshBlack.coffee podcast to talk about his 10 years of leadership and all he's done in state govt. He makes his strong case for the upcoming primary to select a US Senator.
Dahm talks about the vast majority of politicians who campaign as conservatives, but don't keep their promises.
Despite that opposition, Dahm has championed many successes in restoring liberties and keeping govt. accountable to the people.
Eddie & Dave also discuss other issues of the week, including Biden's new 'Ministry of Truth', to add a layer of certification to his many lies.
Audio
Video
Catch all our shows at www.FreshBlack.Coffee
Connect with us at www.facebook.com/freshblackcoffee
Our audio podcast is at feeds.feedburner.com/thefreshblackcoffeepodcast
Our video podcast is at feeds.feedburner.com/freshblackcoffeevideo
Watch the video on our YouTube channel, Facebook, website, or with your podcasting app.
We record the show every Saturday and release it later the same day.
Jeff Davis commentary appears courtesy of www.theThoughtZone.com
at April 30, 2022
Email ThisBlogThis!Share to TwitterShare to FacebookShare to Pinterest
Newer Post Older Post Home