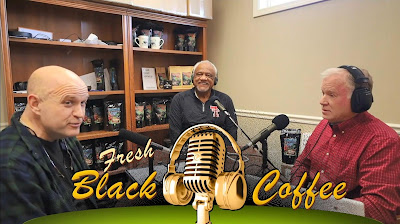 Public defender, Kevin Adams; has uncovered several scandals at the Tulsa County Court House, as well as the State Pension fund for retired judges.
He says it's all keeping his innocent client from avoiding execution by the DA's office.
He tells how a couple of rogue cops tried to carjack a vehicle and beat the snot out of a young motorist.
But the motorist managed to save his life.
Now the young man sits in jail while the prosecutors keep changing the story of what happened that night.
Audio -
Video -
Catch all our shows at www.FreshBlack.Coffee
Connect with us at www.facebook.com/freshblackcoffee
Our audio podcast is at feeds.feedburner.com/thefreshblackcoffeepodcast
Our video podcast is at feeds.feedburner.com/freshblackcoffeevideo
Watch the video on our YouTube channel, Facebook, website, or with your podcasting app.
We record the show every Saturday and release it later the same day.
Jeff Davis commentary appears courtesy of www.theThoughtZone.com
at March 19, 2022
Email ThisBlogThis!Share to TwitterShare to FacebookShare to Pinterest
Newer Post Older Post Home